The chief sources of information on the life of St. Joseph are the first chapters of our first and third Gospels; they are practically also the only reliable sources, for, whilst, on the holy patriarch’s life, as on many other points connected with the Savior’s history which are left untouched by the canonical writings, the apocryphal literature is full of details, the non-admittance of these works into the Canon of the Sacred Books casts a strong suspicion upon their contents; and, even granted that some of the facts recorded by them may be founded on trustworthy traditions, it is in most instances next to impossible to discern and sift these particles of true history from the fancies with which they are associated. Among these apocryphal productions dealing more or less extensively with some episodes of St. Joseph’s life may be noted the so-called “Gospel of James,” the “Pseudo-Matthew,” the “Gospel of the Nativity of the Virgin Mary,” the “Story of Joseph the Carpenter,” and the “Life of the Virgin and Death of Joseph.” 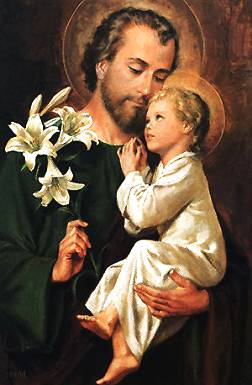 St. Matthew (1:16) calls St. Joseph the son of Jacob; according to St. Luke (3:23), He was his father. This is not the place to recite the many and most various endeavors to solve the vexing questions arising from the divergences between both genealogies; nor is it necessary to point out the  explanation which meets best all the requirements of the problem; suffice it to remind the reader that, contrary to what was once advocated, most modern writers readily admit that in both documents we possess the genealogy of Joseph and that it is quite possible to reconcile their data.

It is probably at Nazareth that Joseph betrothed and married her who was to become the Mother of God. When the marriage took place, whether before or after the Incarnation, is no easy matter to settle, and on this point, the masters of exegesis have at all times been at variance. Most modern commentators, following the footsteps of St. Thomas, understand that, at the epoch of the Annunciation, the Blessed Virgin was only affianced to Joseph; as St. Thomas notices, this interpretation suits better all the evangelical data.

It will not be without interest to recall here, unreliable though they are, the lengthy stories concerning St. Joseph’s marriage contained in the apocryphal writings. When forty years of age, Joseph married a woman called Melcha or Escha by some, Salome by others; they lived forty-nine years together and had six children, two daughters, and four sons, the youngest of whom was James (the Less, “the Lord’s brother”). A year after his wife’s death, as the priests announced through Judea that they wished to find in the tribe of Judea respectable man to espouse Mary, then twelve to fourteen years of age. Joseph, who was at the time ninety years old, went up to Jerusalem among the candidates; a miracle manifested the choice God had made of Joseph, and two years later the Annunciation took place. These dreams, as St. Jerome styles them, from which many a Christian artist has drawn his inspiration (see, for instance, Raphael’s “Espousals of the Virgin”), are void of authority; they nevertheless acquired in the course of ages some popularity; in them some ecclesiastical writers sought the answer to the well-known difficulty arising from the mention in the Gospel of “the Lord’s brothers”; from them also popular credulity has, contrary to all probability, as well as to the tradition witnessed by old works of art, retained the belief that St. Joseph was an old man at the time of marriage with the Mother of God.