Saint Michael the Archangel Parish in Lansford was established in June 1891 to serve the area Slovak Catholics. On September 21, 1890, the Slovaks of the Lansford area first organized a fraternal society under the protection of the Sacred Heart. In June 1891, Father William Heinen, pastor of Saint Joseph’s in East Mauch Chunk, called a meeting at the Lansford Opera House to discuss founding a Slovak parish. The parish was established and placed under the patronage of Saint Michael the Archangel. On July 28, 1891, Father Heinen purchased a plot of ground and immediately the men of the parish began preparing the foundation of the church. The cornerstone was laid on August 30, 1891. While the church was being completed, services were held at Saint Joseph’s in Summit Hill. On December 20, 1891, the new church was completed. Due to the scarcity of Slovak priests, Saint Michael’s became a mission chapel of Saint Joseph’s and Father Heinen traveled to Saint Michael’s each Sunday to celebrate Mass. 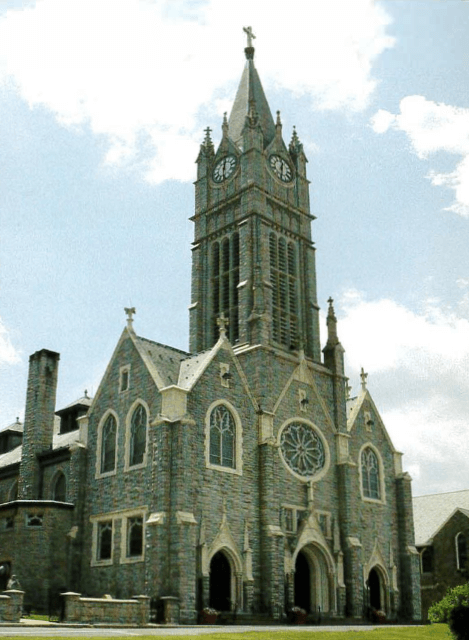 Two side chapels and a steeple were added to the church in 1893. In December 1894, Father Joseph Kasparek was appointed pastor. After only nine months, he was transferred and Saint Michael’s again became a mission-chapel administered by Father Heinen. Father Peter Schaaf became pastor in May 1903. The church was painted and plans for a parochial school were begun. The cornerstone of the school was laid on July 1, 1906. On September 1, 1907, the school was blessed by Monsignor Fisher of Philadelphia. Since the original Saint Michael Church was destroyed by fire earlier in 1907, two of the classrooms were used for Mass. The school was opened by the Missionary Sisters of the Sacred Heart on September 5, 1908. Attention then turned to the erection of a new church. On Memorial Day 1908, the cornerstone was laid and the church was dedicated by Archbishop Prendergast on November 30, 1911. In 1968, a tunnel connecting the church and school was built. Bishop Welsh celebrated the parish’s 100th anniversary on September 29, 1991. The rededication of the church cornerstone took place on Thanksgiving Day, 1991. Father Lawrence Bukaty was the last pastor of Saint Michael the Archangel Parish. 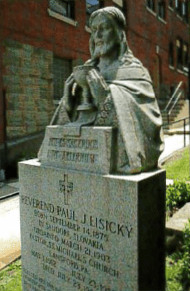 Saint Mary of the Assumption Parish in Coaldale can trace its roots to 1826, when Father William Fitzpatrick was the first priest to minister to Catholics in the Panther Valley. He journeyed from far distant Sunbury to Summit Hill. In the early days, the people of Coaldale walked to Summit Hill to attend Mass. On August 6, 1892, the parish of Saint Joseph in Summit Hill donated $1,000 to the people of Coaldale for the construction of the church. Mass was offered for the first time in Coaldale on August 14, 1892, in the Phillips Street School Building. Father Francis Brady officiated at the first service held. On May 21, 1893, the cornerstone of the new church was laid. On November 1, 1893, Father Daniel Murphy arrived as the first pastor. The church was dedicated on November 19, 1893. Father Robert Hayes became pastor in 1911 and was responsible for the building of the school. Saint Mary’s School was closed during the Depression. Father Cornelius Devitt was appointed pastor in June 1960. He was responsible for the modernizing of the church. Father John Pavlosky, M. Div. was the last pastor of Saint Mary of the Assumption Parish.

Saint Ann Parish in Lansford was established in June 1907. The church was built at East Bertsch and Tunnel Streets. Bishop Thomas J. Welsh blessed the newly remodeled Saint Ann’s Church in Lansford on July 26, 1992. The renovations were begun on September 1, 1991. Father Lawrence Bukaty, M. Psy. was the last pastor of Saint Ann’s Parish. 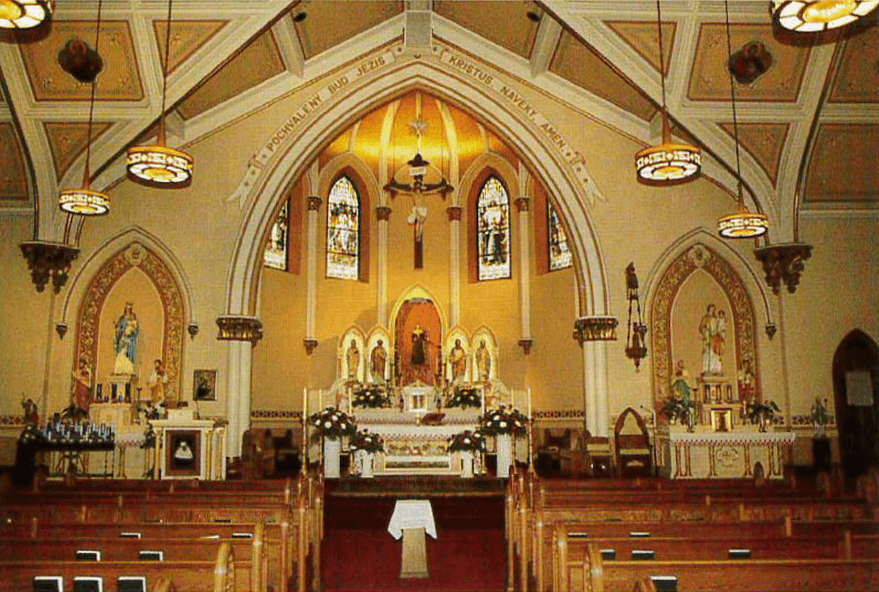 Saints Peter and Paul Church in Lansford was established in October 1907 and a church was soon built. The most recent renovations began with the closing of the church on April 6, 1992. The first Mass after the renovations was on July 4, 1992. During the renovations, parishioners worshiped at Saint Ann’s in Lansford. Extensive plaster repairs, painting, and refinishing were part of the major interior restoration. The church was rededicated by Bishop Thomas Welsh on October 31, 1992. Father Lawrence Bukaty, M. Psy. was the last pastor of Saints Peter and Paul Parish.

Saint John the Baptist Parish in Coaldale was established in 1914 to serve the Lithuanian Catholics. In 1907, Mass was celebrated in the basement of the Public School on East Phillips Street. In 1908, a Lithuanian priest named Father Durickas began celebrating Mass in the little Red School House behind the Public School. In September 1911, Father Peter Gudaitis arrived in Coaldale with the intention of formally organizing a parish and building a church. Saint John’s first wood frame church building was dedicated on May 10, 1914. Father Gudaitis took up residence at Tamaqua in 1913 and continued to serve as pastor of Saint John’s until January 1922. During Easter Mass on April 1, 1920, the wood frame church caught fire. Efforts to save the building were unsuccessful and it was completely destroyed. The new church was dedicated on July 4, 1921. Father Joseph Shelonis became pastor on January 15, 1977. He refurbished the social hall and completed the facade and east wall of the church. Father John J. Pavlosky, M. Div. was the last pastor of Saint John the Baptist Parish. 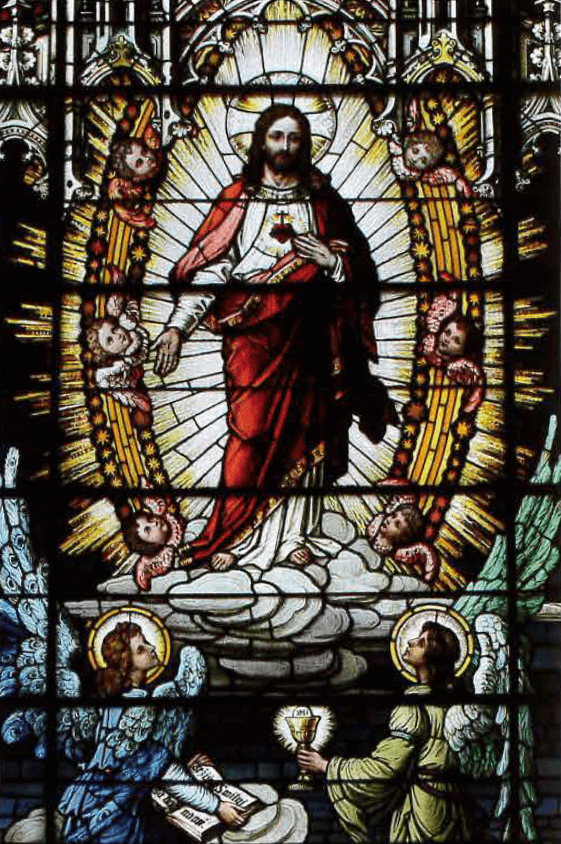 Saints Cyril and Methodius Parish in Coaldale was established on June 10, 1920, due to the efforts of Slovaks who petitioned Archbishop Dougherty of Philadelphia to establish a church for the Slovak people in Coaldale. Father Nicholas Terna was appointed the first pastor and the new parish was placed under the patronage of Saints Cyril and Methodius. Initially, the people gathered to worship at the former Welsh Congregational Church on the corner of Ridge and Fourth Streets. By 1922, the men of the parish excavated the ground for the foundation of a new church on the corner of Ruddle and Third Streets. Mass was first celebrated in the church on December 25, 1924. In September 1928, an elementary school was opened in the lower level of the church building and staffed by the Missionary Sisters of the Sacred Heart until 1969. Father John J. Pavlosky, M. Div. was the last pastor of Saints Cyril and Methodius Parish.